The Challenge: Tsakiris, a well-known Greek potato chip company, wanted to launch a new product line: cheese puffs, hazelnut snacks and snacks with tomato and cheese for younger. The company’s goal was to offer a high quality alternative to cheetos which were monopolizing the Greek market. 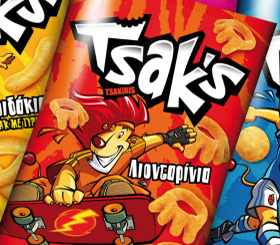 The Solution: A new character was developed to appeal to the younger target audience and answer to the competition’s offering, Cheetos and Chester the tiger, by Tasty Foods. The lion was selected as the appropriate animal to communicate energy and fun. His personality was defined as loving and caring, fun and trendy, energetic and athletic, sociable and informed. Along with the illustration development of the new hero, names where created for him. Tsak was the name finalist. It’s a fun name, phonetically a real American name (Chuck), easy to pronounce in Greek and importantly, it’s linked back to the Tsakiris corporate brand. Tsak’s company of friends was also developed to communicate more comprehensively to the target audience and built relevance, overcoming thus gender and personality barriers. Three more characters were developed. Tsak’s girlfriend is fun and athletic, the monkey is funny and plays practical jokes and the fox is smart and thoughtful (also a symbolic animal in Greek tradition). Tsak and his friends are depicted in the back of the packaging. On the hazelnut snacks, Tsak is depicted signing in Fame Story (the most successful reality show in Greece) and on the cheese puffs playing soccer (Greece won the European cup in soccer in 2004). On the snacks with tomato and cheese, Tsak is depicted skateboarding – a popular sport in Greece. Tsak’s new product line was launched on November 2005. A life-size Tsak mascot was created and premiered at a promotional event. 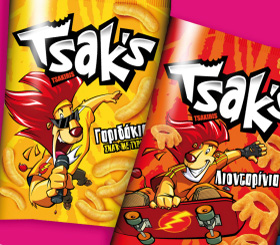 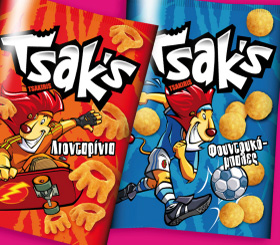