The Challenge: As per the European Community’s directive, by the year 2012 it is required that the analog technology in the television industry in Greece, be abandoned in favor of digital technology. This necessary and required change must be effectively communicated to the Greek population; its benefits as well as how the new technology will be implemented must be understood. A new brand should be developed, in order to educate the public as well as promote the company’s offerings and services. 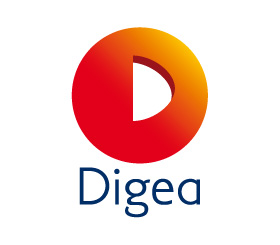 The Solution: A new name, based on the Greek word Gea – earth, and the prefix Di, was developed and quickly built awareness. Digea, although written in English, is easily pronounced by Greeks and is also simple to remember. A three dimensional logo, which capitalizes on the first letter of the brand’s name, came to represent the new entity and at the same time became the symbol of the new technology. Along with the brand’s house-style, Digea’s logo composed a strong, and straight forward corporate identity; effectively differentiated from other brands such as tv channels, programs etc., in the super cluttered television category. Needless to say, Digea’s investment in an educational advertising campaign, critically contributed to rapidly building brand awareness and a strong and positive brand image. 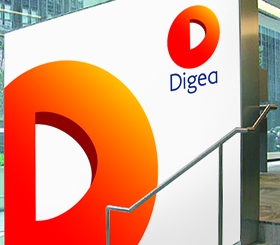 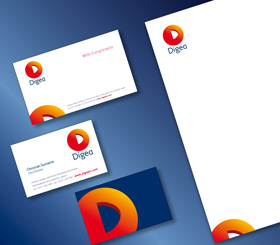